You know when you know something in your heart, but when you say it out loud to people, they may think you're a little crazy? I'm sure you know the feeling, because you talk about it all the time in your interviews. I moved to LA three years ago as a professional dancer knowing (and hoping) that our paths would one day intersect. Your way of being has always resonated with me on a vibrational level that makes people think I'm a little crazy. I've tried to describe it, but I don't think anyone really understands; they just know me as the friend of theirs that's "obsessed with Kesha." Of course, I'm a forever fan--your music got me through my formative years of college and my dorm room neighbors heard "Crazy Beautiful Life" an unhealthy amount of times, I did dress up as you for Halloween more than once, AND I did write my college thesis about you....BUT it's not really that I'm a crazy stalker fan. I just admire you and feel connected to your work, aesthetic and overall vibration. Most importantly, you inspire me and I strive to be a co-creator and collaborator of art as one of your contemporaries.

I could have reached out to you a long time ago, or commented on every one of your Instagram or Twitter posts to get your attention, but it was important to me that I wait for the right time and that I do it artfully. While you weren't able to make music, I had started the process of creating a concept video for the Free Kesha campaign but as I started to put different pieces of the project together, it didn't feel quite right. I needed to wait until I could make a video to your new music once you were free. When "Praying" was released, I almost panicked because I knew the time had come when I had to finally put myself out there and try to reach you. I wanted to do so through the platform of dance and art video. I pulled resources from all directions and friends from all walks of my life supported me in any way they could because everyone I crossed paths with knows about my love for your work.

I have heard you talk countless times about how scary it is to allow yourself to be vulnerable and really put yourself and your work "out there." It's always easier to just play it safe. When it came to the making of my concept video for "Praying," I really wanted to fully commit to the project and take risks. The song resonated with me on a visceral and emotional level that I wanted to convey in my dancing. For sections of the choreography, I actually recorded myself freestyling and then took sections of my freestyle that I liked and re-learned it. I was originally going to have an all-female cast but changed by mind because I wanted to really feel a sense of community and love outside of gender constructs. I wanted to the tone of the video to be celebratory, yet reflective. It's a redemption story for all of us. Each of the dancers in the video brought their own version of the story to the camera. For the visuals in the video, there is a lot of symbolism.

In the opening scene there are CDs and lollipops spread out on the floor. The CDs symbolize your past work and lollipops are the pressure to be "just fun, party, bubblegum, etc." As the video progresses, the lollipops and CDs start to be deconstructed. At one point a lollipop shatters. This isn't showing the deconstruction of the past, but rather just the beginning of a new chapter. The past looks different now, but it is still beautiful and very important. The puking coins and money symbolizes the commodification of the female body in pop culture. Images of crystals throughout suggest growth and vibrational transformation. When I puke glitter at the end, it represents the purging of the need for women to only be confectionary in order for mainstream media to value them. The overall goal was to illustrate a sex-positive, body-positive feminist narrative where women (and men) are simultaneously allowed to dress, act, and say what they want with as much color, glitter or glam that they want, while still being taken seriously with an articulate and feminist agenda.

There is so much more that I could say, but I hope that this is only the beginning. For years, I have had an uncanny sense of assuredness that one day our paths would cross and we would work together as creatives. I would love nothing more than for that to happen. Maybe we were friends in a past life. I don't know. What I do know is that even if we never meet, your work has had a major influence on me and the process of creating this concept video to "Praying" was incredibly cathartic and an amazing learning process. I was able to see my vision come to life from inception to completion. I hope that you like it. Tomorrow I will be in Las Vegas to see your Rainbow tour. See you there. <3 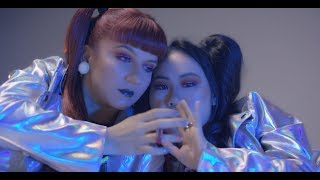